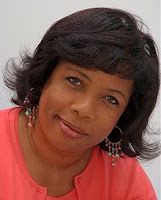 I've always intended on writing a post bewailing the lack of light-hearted YA and MG books about people of color (it's coming in February, I promise!). Fortunately, we do have some authors like Crystal Allen who are trying to show that not all books with poc main characters have to be heavy, they can be hilarious and just plain fun. Even better, Crystal agreed to be spotlighted in my new feature (inspired by Kelsey the BookScout) that highlights YA/MG debut authors of color.

Welcome Crystal to Reading in Color!

Thirteen-year-old Lamar Washington is the maddest, baddest most spectacular bowler ever at Striker’s Bowling Paradise. But he doesn’t have game – not like his older brother Xavier the Basketball Savior. And certainly not like his best friend “Spanish fly guy” Sergio. So Lamar vows to spend the summer changing his image from dud to stud by finding a way to make money and snag a super fine Honey. When a crafty teenage thug invites Lamar to use his bowling skills to hustle, he seizes the opportunity. As his judgment blurs, Lamar makes an irreversible error, damaging every relationship in his life. Now, he must figure out how to mend those broken ties, no matter what it will cost him.

That title is a mouthful but most definitely an attention-getter!

In February of 2008, I attended a writer's conference in Houston, where superpower agent, Jennifer Rofe' from Andrea Brown Literary Agency, (Jen was not my agent at that time. I didn't have one) was one of the faculty members. By fate, she critiqued ten pages of LAMAR and loved it. She asked for more pages and I sent them to her. This interaction between us went on for nearly nine months (isn't that like a pregnancy?), where she asked questions, and made me really focus on areas of my story that could be stronger. Then, in December, 2008, Jen offered representation and after thinking long and hard about it for three seconds, I accepted! :)

Jen and I worked very hard on LAMAR, revising and talking things through. And once we believed LAMAR was the best he could be, Jen provided the manuscript to editors at several different publishing houses. During the submission process, I made wonderful connections with several extraordinary editors interested in LAMAR. But, I found there to be something special about the connection with Harper Collins' Kristin Daly, editor at Balzar and Bray. She clearly loved LAMAR as much as I do, and our conversation seemed easy from the moment we said "Hello." So, I signed with Harper Collins.

In all honesty, not only do I never read about Black people bowling, I rarely see it. I think it's awesome that Lamar's Bad Prank features a Black kid bowling. You bowl too. What attracts you to bowling and why did you decide to make it a focus of the story?

I've bowled all of my life. My father managed a bowling alley when I was very young. I've bowled on leagues since my middle grade years. A bowling alley is one place where trash talk comes in all languages; hands, facial expressions and of course, straight from the mouth! It's an equal opportunity, multicultural sport, where abilities and disabilities don't measure a person's level of skill . I've seen bowlers in wheelchairs "mash" other bowlers like potatoes! Once I realized there weren't many stories written with bowling as a main focus, I got busy with LAMAR and it's been so much fun!

I rarely go bowling but next time I do, I'll be looking out for trash-talkers! I love that it is an equal opportunity sport, although I never thought of that until you brought it up :)

I believe strengths and weaknesses should balance out a great relationship. Therefore, Olugbemisola Rhuday Perkovich's 8TH GRADE SUPER ZERO would be the perfect book to read with LAMAR and here's two reasons why:

1. In Super Zero, Reggie, the main character, lacks confidence, but eventually gains the self-assurance he needs. My main character, Lamar, has enough confidence for the entire planet, but later learns what it means to be humble.

2. Both stories have a focus on friendships and lots of humor.

If the summary of Lamar's Bad Prank and the interview so far hasn't sold you on the book, the above statement should allow you to finally make up your mind about why you must read this book. 8th Grade Superzero is one of my favorite books, absolutely wonderful! Time for me to check out my next date ;)

Do you have any bad (or good) pranks to share with us that you yourself committed?

One prank. When I was around nine or ten, I put a tack in my Mom's chair and then stood there while she sat on it. (Wait, it gets worse) I lied and said I didn't do it. Mom and I were the only people home at the time, so it couldn't have been anyone but me. Forgot to factor that in.

Oh no! I don't think I would still be alive today if I tried to pull a stunt like that. ha

I don't get to read much YA, but I do have a few favorites.

I'm sure there's more, but those came to me immediately!

As for '11 debut authors, I belong to a group of 2011 debut authors called "The Elevensies." We've been together for at least a year and I'm looking forward to purchasing all of their books at major bookstores!

What two PoC characters would you love to hang out with?

I would absolutely love to hang out with Milagros De La Torre in the story, Milagros, Girl from Away, and Lula, a hilarious character in Janet Evanovich's bounty hunter series.

That is so funny that you mention Milagros since I recently read that book! The writing was lovely. Gotta love the humorous characters too

What is one issue you have with YA/MG?

I would have to say the lack of representation of young adults and middle graders of every race, in plain, everyday situations. There shouldn't be a stereotype of ethnic children doing ethnic things. Every African American character doesn't have a sibling or parent on drugs or in prison. Every Hispanic character doesn't have a sibling in a gang. Regular, everyday, kid-stuff should be the focus, so the ethnicity of the character is understood, but is secondary to a story every child can relate to.

What is something you love about YA/MG?

Tears of a Tiger by Sharon Draper

Thank you, Ari, for the interview!

You know what to do, preorder How Lamar's Bad Prank Won a Bubba-Sized Trophy (I have an ARC that keeps landing in the gutter [haha bowling joke] because I've had a lot of big school assignments and finals. But I'll be starting it asap!). Furthermore, please, please aspiring-authors take heed of Crystal's comments about the intense YA/MG books about poc. It's important.