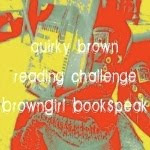 By far one of the toughest challenges, Terri has created the Quirky Brown Reading Challenge which forces readers to find books that depict another side of the usual 'Black Experience'. Every Black person has some shared experiences, but also very different and unique ones and this challenge represents that. I think all the books had to be a Black author but there were two books I put on here even though they were by white authors because they sounded so intriguing! I just won't count them.

I, of course, tried to stick with YA/MG and it was not easy! This is all I've got. I counted historical fiction but I'm not sure if fantasy counts...

1. The Kingdom on the Waves (The Astonishing Life of Octavian Nothing, Volume 2) by M.T. Anderson (the first book had a very unique and scientific twist on slavery, riveting)

6. The Other Half of My Heart by Sundee Frazier (biracial twins-one looks white, one looks Black, family drama!)

7. Out of My Mind by Sharon Draper (cerebral palsy)

8. Jimi & Me by Jamie Adoff (It's Jimi Hendrix-he defies all stereotypes)

Slice of Cherry by Dia Reeves

The Kayla Chronicles by Sherri Winston