Waiting on Wednesday: We Could Be Brothers 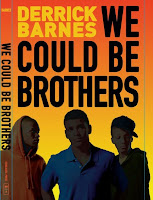 Two thirteen- year-old African-American boys become friends during a three day stint in an after school suspension. They were both involved in two unrelated incidents with the same person, the resident menace at Alain Locke Middle, Tariq Molten.

-This middle grade novel does have the potential to be a bit heavy handed in its message but I don't think it will be. I read and loved the author's first YA book, The Making of Dr. Truelove, which is hilarious and a bit crass. We Could Be Brothers will probably not be as crass but I'm guessing there will still be some good humor. Also there is a huge need for more books about African American boys and I'm thrilled that this novel helps close that void.

What book(s) are you waiting on this week? Any PoC releases?