I forgot to check my mailbox this week so I'm not sure what new books I got. I apologize if you sent me something last week and I still haven't thanked you yet!

I didn't want to not post today so I thought I would share a bit about what I'm reading for school. I'm curious if people want some school updates? Nothing too long, just what we are reading and whether I liked the book or not. Or something like that. Let me know in the comments (if there are no comments I'll assume that means no one cares about my school life, which I completely understand. Hearing about school is depressing).

How Soccer Explains the World: An Unlikely Theory of Globalization by Franklin Foer

Soccer is much more than a game, or even a way of life. It's a perfect window into the crosscurrents of today's world, with all its joys and sorrows. In this remarkably insightful, wide-ranging work of reportage, Franklin Foer takes us on a surprising tour through the world of soccer, shining a spotlight on the clash of civilizations, the international economy, and just about everything in between. How Soccer Explains the World is an utterly original book that makes sense of our troubled times.

-Did this book explain the world? Was it utterly fascinating? Yes. I know how to play soccer but I don't watch it, I just hop on the bandwagon when the World Cup comes along. This book provided a great look at the world of soccer (it's not the best book to use as an introduction to the soccer world because at times I was a bit lost). We had to read a book over the summer for my Comparative Government class (which was a first. My school never assigns summer reading) and the choices included this book, The Post-American World by Fareed Zakaria or Lipstick Jihad by Azadeh Moaveni. Obviously I picked this book and while it wasn't my original choice (Lipstick Jihad was checked out of my library at the time), I'm very glad I read it.

Lipstick Jihad: A Memoir of Growing Up Iranian in America and American in Iran by Azadeh Moaveni

Azadeh Moaveni was born in Palo Alto, California, into the lap of an Iranian diaspora community longing for an Iran many thousands of miles away. As far back as she can remember she felt at odds with her tangled identity. College magnified the clash between Iran and America, and after graduating, she moved to Tehran as a journalist. Immediately, Azadeh's exile fantasies dissolved.

Azadeh finds a country that is culturally confused, politically deadlocked, and emotionally anguished. In order to unlock the fundamental mystery of Iran-how nothing perceptibly alters, but everything changes--she must delve deep into Tehran's edgy underground. Lipstick Jihad is a rare portrait of Tehran, populated by a cast of young people whose exuberance and despair bring the modern reality of Iran to vivid life. Azadeh also reveals her private struggle to build a life in a dark country--the struggle of a young woman of the diaspora, searching for a homeland that may not exist.

-I have a friend who doesn't like to read much (at least I don't think she does. I don't know, we never talk about books but I digress) but she really really liked this book. My teacher has talked about it a bit and I think it sounds like a great read. The first country we are studying is Iran and since I don't know much about Iran's history, I figured I would start reading this book while we study Iran. I'm heading to go get it today. Plus I'm eager to learn about youth culture in Iran, specifically the underground movement.

Junior year is British literature. I'm not particularly pleased about that (dead white male authors), but I will try and have an open mind (based on the syllabus we received the only book we read by a white female is Daughter of Time by Josephine Fey. There are no authors of color on the list, even though our teacher told us that Brit Lit includes literature from former British colonies like Jamaica, India, etc. For the record my English teacher is not white, but is a male.)We are starting off reading The Book of Lost Things. 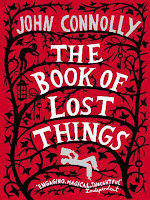 The Book of Lost Things by John Connolly

High in his attic bedroom, twelve-year-old David mourns the death of his mother, with only the books on his shelf for company. But those books have begun to whisper to him in the darkness. Angry and alone, he takes refuge in his imagination and soon finds that reality and fantasy have begun to meld. While his family falls apart around him, David is violently propelled into a world that is a strange reflection of his own -- populated by heroes and monsters and ruled by a faded king who keeps his secrets in a mysterious book, The Book of Lost Things.

Taking readers on a vivid journey through the loss of innocence into adulthood and beyond, New York Times bestselling author John Connolly tells a dark and compelling tale that reminds us of the enduring power of stories in our lives.

-This was a surprise read. I had never heard of this book and I didn't think we read modern literature (published in 2007). We are currently reading it and it's very good. Very creepy, but I love the twisted fairy tale setting. I can't wait to finish this book (I usually read ahead in school reading but I don't have much time to do that this year) because I have a feeling the ending will be good.

Composed toward the end of the first millennium, Beowulf is the classic Northern epic of a hero's triumphs as a young warrior and his fated death as a defender of his people. The poem is about encountering the monstrous, defeating it, and then having to live on, physically and psychically exposed in the exhausted aftermath.

-We read this next. I.DO.NOT.WANT.TO.READ.THIS. It sounds boring, the movie looks too long to watch and it had to be translated from Old English to modern English. UGH. I need someone to tell me that I will not despise this book.

The rest of our list consists of Chaucer, Shakespeare and Dickens.

I would love recommendations of British literature that is not by white males (Helen Oyemi comes to mind). I can't read it now, but maybe for the summer.

So has anyone read these books? If so, what did you think of them?