Our Kind of People: Inside America's Black Upper Class

Quick note: I want to do more than just YA/MG (and slowly transition out of MG because it doesn't hold my interest anymore really. So the rest of those MG reviews that pop up will be for books that were already sent to me). I want to include lengthier reviews of non-fiction and adult fiction and 'new adult' (really young adult would be the technical title in my opinion), especially non-fiction books that pique my interest in discussions like the following 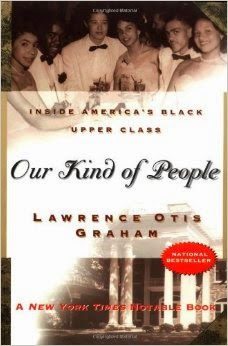 IQ (selfish quote since it's about my hometown) "But even with a legacy of such well-heeled black businessmen and even with its history of serving as the hometown for the first three blacks-Oscar DePriest, Arthur Mitchell, and William Dawson-to serve in a post-Reconstruction U.S. Congress, Chicago and its black elite remain a conundrum when students from other cities with large black populations analyze Chicago's inability to elect local black leaders with any consistency. Unlike Atlanta, Washington, Detroit, New Orleans, and other cities with a long history of a black elite, Chicago has managed to elect only one black mayor. It has done no better than communities like Minneapolis, Seattle, or Denver-cities that have elected black mayors with newer and smaller black populations." pg. 192

The author dives into the world of the Black elite and major cities, short and sweet summary.

There is a lot of vitriol on the Goodreads page of this book which I think is unnecessary, people seemed to miss the point of this book. The author is apologetic at times, he doesn't condone the elitist attitudes of the Black upper class, a world he inhabits. I thought the writing was concise and the story elements flowed, a lot of names are thrown around but the author always takes the time to throw out some defining characteristics. It's an ambitious book and I commend the author for writing about an element of Black culture that NEVER gets talked about. I admit I think of my family as solidly middle class with a touch of upper middle class. Psh not according to this book. All we have 'going' for us is that we are in Jack & Jill. I do think this book needs to be updated, my Jack & Jill experiences were vastly different from the author's and I would love to know what the Black elite thought of the Obamas (my guess is that the old guard wouldn't be super fond of them based on the one interview I was able to find, regarding the Obamas first trip to Martha's Vineyard) but they may be more open-minded than I think.

The author traces the history of the Black upper class, delves into the world of the 'right' colleges for Black students to attend (the Ivies and the top HBCUs and Wellesley) and a little bit about the secret world of Black fraternities and sororities (Alphas, AKAs, Deltas, Omegas). He then discusses the post-college groups (the Boule, the Links, the Girl Friends) and activities that affluent Blacks are involved in and takes the time to cover the history of the Black elite in every major city (Chicago, NYC, DC, Atlanta) as well as some smaller cities (Memphis, Philly, etc). There is even a chapter dedicated to passing (which I feel like no one does anymore but I have no evidence). Obviously some of the attitudes made me cringe, some were downright ignorant. But I don't think this book engaged in race-bashing, the author quotes the people he interviewed (many do not want their names included for obvious reasons) to give you an idea of the 'secret' (aka ignored) lives of the Black upper class, he airs some dirty laundry but also highlights the many positive ways they contribute to Black culture and uplift.

Our Kind of People takes a hard look at some snobs but also some people who genuinely want to use their money to do good things for the Black community. There are doses of classism but it's also a fascinating (and to me welcome) look at a lengthy period of history in which the accomplishments of Blacks were ignored (some Black wealth can be traced back to Reconstruction and some even before that). There are no celebrities mentioned here, at least not athletes and singers, which is a refreshing change. And I definitely felt some serious Black pride reading about all the amazing things we've accomplished. We still have a long way to go but we're making progress, we're getting there. My hope is that the Black upper class remembers to reach behind them and lift up others, stay true to their roots or look outside their small worlds (if they came from wealth already). I suppose the book could seem tedious to some but I love history so I sucked it all in. I also think this is a book that requires extra research, take the time to search for all the names he mentions, it will be well worth your time.

PS The book is old so it's kind of fun/jarring to read about people who are now less active in our society/a lot older/no longer in power/their circumstances have changed. For example Valerie Jarrett's former husband was interviewed as were his parents, but she is not although they were married at the time (I think). He is in the Chicago chapter and her family is mentioned in the DC chapter.