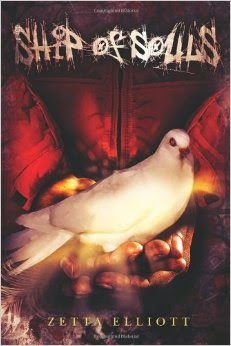 IQ "Kids on my block called 'reject'. Grown folks at church called me an 'old soul'. One girl at school told me I talked like a whiteboy. But when I ask Mom about it she just said, 'you are black. And nothing you say, or do, or pretend to be will ever change that fact. So just be yourself, Dmitri. Be who you are." pg. 3

Dmitri, known as D, is living with a foster family after his mother dies of breast cancer. D is used to having his foster mom all to himself, when she takes in Mercy, a crack-addicted baby he finds himself unable to cope. He is at a new school and while tutoring he becomes friend with Hakeem, a basketball star who needs extra math help and Nyla, a military brat both boys have crushes on. Sometimes after school D bird watches in Prospect Park and he discovers a mysterious bird, Nuru that can communicate with him. He enlists Hakeem and Nyla to help him help Nuru (who is injured) escape evil forces, the ghosts of soldiers that died during the Revolutionary War. They journey from Brooklyn to the African Burial Ground in Manhattan to assist Nuru in freeing the souls that reside there.

I wish some of the fantasy elements had been developed a bit further, such as Nuru's role, his dialogue also came across sounding a little ridiculous and heavy on the 'wise mentor' scale. The characters did come across as having a message. It is made very clear that Hakeem is Muslim and Nyla is 'different from the stereotype. I wish the individuality of the characters had come off in a more subtle way (for example when Hakeem describes how his older sister listed all Muslim basketball players to convince his dad to let him play. And then Hakim lists them all and weaves in tidbits about the hijab. It came across as stilted for middle school dialogue). But then again this book is intended for a younger audience who need it hammered in that it's dangerous to define people and put them in boxes. I also wish the book had been longer just by a few chapters, selfishly because I wanted more historical tidbits but also because I felt that the fantasy elements happened so fast as did the sudden strong friendship with Hakeem and Nyla. And the love triangle made me sad but that's not the author's fault! Although I would have been happy without it.

Yet again Zetta Elliott seamlessly blends together history and fantasy, Black American history that is often ignored in textbooks. Unlike the descriptions of the characters I found the historical tidbits woven in artfully. There are so many goodies in here about the importance of working with other people, that heroes need not go it alone. This is especially vital because the author makes it explicitly clear that D is unbearably lonely but he keeps himself isolated from other people because he doesn't want to be abandoned or disappointed or lose them in a tragic way as happened with his mother. The author does a great job of making you truly feel and understand D's loneliness and your heart aches for him. Also while I didn't think the friendship had enough time to really grow into the strong bonds that developed so quickly, it was a very genuine friendship (once you suspend your disbelief) in terms of doing anything and everything for your friends and believing the seemingly improbable. It is also clear that the author has a strong appreciation of nature and that makes the fantasy elements more interesting while also making it appear more realistic.

Ship of Souls is a great story that focuses on a portion and population of the American Revolution that is completely ignored by most history outlets. The fantasy world is well-thought out, I only wish the book had been longer to explain more about the world D and his friends get involved in as well as more time to believably develop their friendship. The characters are strong, but they were written with a heavy hand that tries hard to point out how they defy stereotypes.  I devoured the story not just because of the length but because it is so different from anything else out there and it's a lovely addition to the YA/MG fantasy world. I can't wait to see what the author does next and again I adored her first YA novel A Wish After Midnight. I recommend both books.

Disclosure: Received from the author, who I do consider a wonderful friend and mentor. Many thanks Zetta!