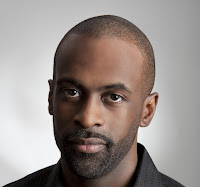 Today it is my absolute honor to introduce Christopher Grant, the author of Teenie. Mr. Grant is the first author I interviewed for my Elated Over Eleven feature. In this feature, I interview 2011 YA/MG debut authors of color.
Teenie will be released December 28, 2010. Close enough to 2011. Keep reading to learn more about Teenie and the time Christopher Grant knocked down a little kid for the 7th Harry Potter book :p
Please share what Teenie is about.
I usually describe Teenie as: the funny stuff that happens in a West Indian family meets an afterschool special. I think my editor did a fanastic job of encapsulating what the story is about in the summary below.
High school freshman Martine (Teenie for short) is a good student, with a bright future ahead of her. She's desperate to be accepted into a prestigious study abroad program in Spain so that she can see what life is like beyond the streets of Brooklyn. She wouldn't mind escaping from her strict (though lovable) parents for awhile either. But when the captain of the basketball team starts to pay attention to her after she's pined away for him for months and Cherise, her best friend, meets a guy online, Teenie's mind is on anything but her schoolwork. Teenie's longtime crush isn't what he seemed to be, nor is her best friend's online love. Can Teenie get her act together in time to save her friendship with Cherise, save her grade point average so that she can study in Spain, and save herself from a potentially dangerous relationship?
I really like that it's about a West Indian family. I like seeing novels that are about Black people but don't solely focus on Black Americans, but also showcase Black immigrants/first generation Black Americans. I like both summaries, but I have to admit, Chris, yours would totally win me over! But it's the editor's summary that attracted me to the book in the first place ;)
How did you break into publishing?
Breaking into publishing was a roundabout journey filled with missteps and pitfalls. I received over a hundred rejection letters, ranging from the "form" variety (we don't like your story, but since we're so busy, we can't tell you why), to hand written notes simply saying, "Not for us." I made a wall of motivation, which included cut ups of all my rejection letters and some Bible verses. I used it to keep me going.
Martine (Teenie) wants to be accepted at a study abroad program in Spain. Why did you chose Spain as her destination and have you ever been there?
My wife and her cousin always talked about how great of a time they had spending a semester abroad in Spain. Having never been there myself, it made the choice easy, considering I could turn to them whenever I had questions about what they did and where they went (while they were there).

What book would your book date?
Teenie's father Beresford wouldn't be too keen on Teenie dating anyone, or anything for that matter. Jokes aside, Teenie loves to read. I could see her thoroughly enjoying the Brief and Wondrous Life of Oscar Wao. She shares many of Oscar's life experiences as a first generation American of Caribbean descent.
I LOVE The Brief and Wonderous Life of Oscar Wao. Perhaps I will use the release of Teenie as an excuse to buy both books and re-read it side by side with Teenie? I 100% sympathizes with Teenie's father not allowing her to date, tell me about it!
You've stated that you love to travel, what is the favorite place you've visited? And what country would you love to visit (that you haven't already)?
Dubai was pretty intense, but if I had to pick a favorite, it would have to be Grenada. I lived there for 6 months and did a lot of writing there. I've yet to find another place where I've felt as comfortable doing so.
My wife and I had to postpone a trip to Thailand. I am looking forward to rescheduling that one.
I'm so envious of all your traveling, Spain is my number one dream vacation and I would love to see Dubai and Thailand! I don't know much about Grenada though.
What are some of your current favorite YA reads? What fellow '11 debuts are you looking forward to?
Be More Chill-Ned Vizzini. The Book Thief-Zusak. Harry Potter 1-7.
I'm looking forward to reading So Shelly-Ty Roth, and all the rest of the debut novels from the Elevensies crew.
I've heard of most of the books you mentioned, but not Be More Chill. It sounds like a fantastic read, adding it to my TBR pile.
7. What two PoC characters would you love to hang out?
Amabelle Desir, the heroine in Danticat's Farming of the Bones. Her story was one that I couldn't stop thinking about.
Panthero from Thundercats. Man he was bad a$$ and could drive the heck out of that Thundertank. I'd love to take him and that tank back to Haiti in 1937 and see if anyone would've messed with Amabelle then!
8. What is one issue you have with YA/MG? What is something you love about YA/MG?
I used to hate the weird looks I would get for reading YA on the subway. Nowadays, I take comfort in knowing that I'm not the only adult that loves reading the stuff, and openly admits it!
I would like to take this opportunity to apologize to the kid in Borders that I trucked to get the last copy of Harry Potter and the Deathly Hallows. I have to say, I'm really looking forward to seeing people reading my book on the subway.
I don't read much YA on the L or the Metra precisely for that reason, but I think you do get fewer looks now which is good. There's nothing wrong with reading YA, that stigmatize is so irritating. *ends mini tagent* I hope that kid is reading this :)
Where can readers learn more about Teenie and you?
Website/blog: cgrantbooks.com Twitter: @nyroots6
Thank you so much for your time and congratulations on your soon-to-be-debut!
Posted by MissA at 10/29/2010 12:01:00 AM