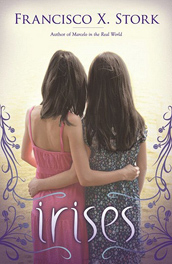 IQ "Mary smiled. She always smiled when people said living family. It meant that people didn't stop being family when they died; they just turned into your dead family" pg. 144

18 year old Kate wants to be a doctor, 16 year old Mary wants to be an artist. Both girls must put their dreams on hold when their strict father dies, leaving Kate as Mary's legal guardian since their mother is in a permanent vegetative state. Her father told Kate that family always comes first, even if that means Kate needs to hold off on Stanford. Further complicating the matter is that Simon, Kate's boyfriend, has asked her to marry him in order to provide for both her and Mary. Meanwhile Mary is drawn to Marcos, a boy with artistic talent but a violent past. The girls are struggling over the death of their father, accepting their different personalities but what may be the final wedge between them is the decision regarding their mother. They can no longer afford to pay the medical bills keeping her in her vegetative state but she is their mother....

I love Francisco Stork's books. Long time readers of this blog know that, I adored Marcelo in the Real World and was quite fond of The Last Summer of the Death Warriors. Unfortunately I found Irises to be my last favorite Stork book thus far. Granted, this was bound to happen but the summary was so good that my hopes were quite high. All this being said, it was difficult for me to put my finger on why I did not like this book. It just didn't work for me. Part of the issue was that Stork raises juggles so many balls in the air, in a way that I did not find effective. I wish he had stuck to two or three issues (such as the issue of whether or not to pull the plug and how to cope with their new-found independence) and focused on really fleshing out the secondary characters (such as Simon and even Mary). I found the issue of life support inadequately explored, even though I had thought that was at the whole heart of the book. I did find it interesting that the girls (especially Mary since she was younger) did not go crazy or at least engage in more normal teenage acts that their father had previously forbidden. Of course most people don't immediately go party after the death of a parent, but I was surprised that very little mention was made about bigger temptations of Mary and Kate (such as going to the mall, an act their father did not allow).

Both girls seem to be losing their way where their Christian faith is concerned and I felt that Mr. Stork did a good job of subtly addressing the questions that arise when one has a crisis of faith and whether or not you can return to your faith. I also found it really interesting that the author made the girls Protestant. This was a note of interest to me because the girls are Latino and I'm Latino, and I have grown up around mostly Catholic Latinos so I found this new world of Protestant Latinos quite intriguing (of course not all experiences are the same but the book gave me a basic idea). I thought the idea of marriage-as-an-escape was an issue well-explored, even if its a concept many people do not realize is prevalent. Kate was also a great multidimensional character as was the pastor, Andy Soto. I found their interweaving storyline to be the best in the book (it is mostly Kate's story) and very believable.

Ultimately Irises left me indifferent, I certainly don't hate it but I did not love it or even enjoy the book all that much. However the writing is mostly strong, with a few secondary characters left underdeveloped. The book mostly suffers from having too many plots and setbacks occurring. Its strength lies in the simple, effective writing and the realistic dialogue. The issue of faith was portrayed in a respectful, non-preachy manner which made the book more compelling. What did everyone else think?

Disclosure: Mr. Stork kindly sent it to me (a whole year ago I'm ashamed to say). Thank you so very much!