Picture Book: We Are America 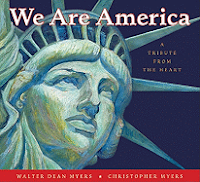 We Are America: A Tribute From the Heart by Walter Dean Myers, illustrated by Christopher Myers 2011
HarperCollins

IQ "I found an endless land, Its promise flowering in lush fields, Purple mountains etching their majesty in the pure air, Flat plains that absorbed the warm summer rains, Canyons that swallowed the imagination, And freedom Freedom like water on the tongues of thirsting men, Freedom as sweet as young love"

*Note: My ARC fell apart and doesn't have page numbers

This is my first picture book review and probably my second-to-last so please don't take this as a sign that I now review picture books. I'm not going to rate picture books, especially since I have no idea what to talk about. Most artwork looks completely fine to me so I can't distinguish...

We Are America covers American history starting from before America was discovered to the 21st century. There are illustrations and quotations from some of the most well-known Americans to lesser well-known but important Americans (Emma Lazarus, Barbara Jordan, Tecumseh, Abraham Lincoln and more) as well as quotes from vital documents. This is the Myers' ode to America, free-verse poetry and mural-like paintings, a celebration of America and a chronicle of the ups and downs of our history.

While I had my little disclaimer above stating that I'm not an expert at judging artwork, but I did notice something particularly cool about the paintings in this book. The paintings resemble murals and they merge into each other. There's one picture with a Black man surfing and then another Black man standing with his arms spread out which merges into a picture of Amelia Earhart. I would say that this book should have been more specific about who was in each picture because like in the example I used, I have no idea who the Black guy is. Some of the pictures aren't meant to depict only famous Americans but just Americans of all different colors and backgrounds living their lives but it's unclear when it's famous people or when it's 'ordinary' people.

The poetry works so well with this story, I think it might actually be one of the best ways to show pride in your country because poetry seems to be so personal. Each phrase seems to have been chosen with care, presenting a vivid picture of the various sides of America. The quotes all tie in well with the pictures and verses, the pictures are diverse. This is not just White America or Black America or Latino America or Asian America, it's the salad America where so many wonderful shades and cultures are represented and respected.