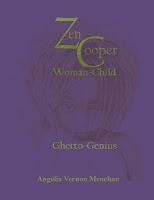 IQ "he knew Frieda only ran from what she wanted." pg. 32 (Frieda is Zen's mother and the 'he' is Charlie. I like this quote because I think many of us do run what from what we want the most because we are afraid that we don't deserve or that in the end, we will never have it).

Zen Cooper is a genius and all around amazing. She adores her mother, but her mother doesn't seem to care about her at all. The only adult in her life that really cares is 'Crazy Charlie'. All Zen can depend on are Crazy Charlie and her books.

Amazing. This book used that word to describe Zen so many times I wanted to scream. Yes she is amazing, she's perfect. I guess her one flaw would be when she finally speaks up to her mom about how she is treated at home. Why does it seem like self-published books want their main characters to be flawless? It's great to see a strong, intelligent young girl in a book. Who also has a job, can dance extremely well and has good fashion taste. I'm sure I'm leaving out some of her other accomplishments but I got bored reading them and hearing about how 'amazing' Zen was. I kid you not that word is used every other chapter by all the adults in her life. I wanted to at least see some originality, like 'Zen is an exceptional child', 'stupendous', etc. There were a lot of holes in this plotline. Like how Zen's mother just decides to become a lesbian? Um ok. But she doesn't see herself as bisexual, but then she falls in love with a guy and....it was just odd. I don't want to give anything away but Zen's mother needed to be more developed. Asides from the constant 'amazing's scattered throughout the book, I felt that it couldn't decide if it wanted to be young adult or adult fiction. The author puts in the head of Zen's mother and father as well as Crazy Charlie's sister and Zen's mother's lover, Alice. Granted it switched off pretty evenly between the adult voices and Zen's voice but neither side was fully fleshed out. For example, why was Charlie called Crazy? He was in the war and came back depressed but no proof is ever shown that he committed actions that might be deemed 'crazy.'

I did like how this novel shows the different types of family and emphasizes the importance of family. Zen is forced to grow up fast and she's very mature, but (and I suppose this could count as a flaw?) she has one final moment of vulnerability. It's nice to see a main character who is so self-assured and poised, but it does grow tiring after awhile. There's enough drama in the story that kept me semi-interested, although it runs rather predictably. The dialogue is quick and realistic to how teenagers would speak and I could identify with Zen feeling alienated from her classmates.

Zen Cooper: Woman-Child, Ghetto Genius has some serious potential. If Zen was a more realistic teenager (i.e. a flawed human being not a saint-in-training) and the backgrounds of the other characters was dug into even more, this book could be quite engrossing. The author introduces various storylines (the strained relationship between Zen's mother and Zen's grandmother, war and its effects, lesbians) but doesn't seem to want to follow through on any of those storylines, satisifed with merely introducing the storylines. Zen is a remarkably pised teenager with great odds aganist her, and I wanted to see her suceed. I admit, I was turned off even by the title (why does she have to be a ghetto genius? Why not just a genius?) but I think I was just being crabby. Don't let the title and cover deter you from this book if it sounds like something that would interest you. It's not for me but everyone else loved it, go figure.

Disclosure: Received as part of Books And... blog tour, thank you!

Angelia Vernon Menchan considers writing to be the elixir of her soul. Since learning penmanship at age four, most days have found her jotting down thoughts in a notebook. After decades of journal-keeping she decided to try her hand at writing and publishing books, from which was born her small publishing company, M.A.m.m. Productions through which she publishes her own books that she has coined, 'Fictionalized Truths, Ageless Fiction and Ramblings.'

When not writing, Angelia is a wife, mother, mentor and nana who loves reading almost as much as writing. Angelia is also an Avid Blogger and posts blogs most days to her blog, RAMBLINGS or for Skirt Magazine
www.angeliamenchan.com