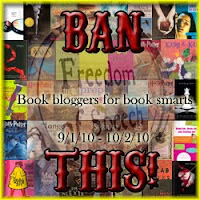 Steph Su is hosting a Banned Books Reading Challenge. I'm doing this really late and I'm not even sure if I'll be able to complete it but I'll try. I haven't been to the library or bookstore in FOREVER and that makes me sad =/

You know how I do, so you should already know that I'll be reading banned books about poc. Since it's the school year, I'm going to focus on YA/MG since that takes less time.

1. The Afterlife by Gary Soto

2. Whale Talk by Chris Crutcher (as you all know this is my favorite book EVER. But I don't own it and my first review of it is horrible. So I want to buy this book and give it a way better review)


3. A Hero Ain't Nothing But a Sandwich by Alice Childress

9. The House of the Scorpion by Nancy Farmer

It became difficult to find yA/MG books about poc were banned once I decided not to repeat authors. Alex Sanchez, Chris Crutcher, Virginia Hamilton and Jacqueline Woodson have quite a few books about (or featuring) poc that were banned. It's interesting that not many YA/MG poc books are banned compared to the adult books about poc (I Know Why the Caged Bird Sings, Native Son, The Bluest Eye, etc). I wonder why that is?
Posted by MissA at 10/02/2010 01:50:00 PM