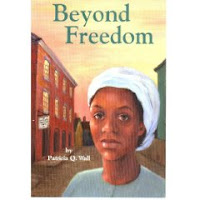 Beyond Freedom by Patricia Q. Wall 2010

IQ "It's hard sometimes, not to begin blaming yourself when all you get from white folks is meanness. [...] You're now dealing with what I call the black folks second struggle-the struggle that comes after we get free of slavery. We've managed to get our bodies free, but for some of us there's still that struggle to get our minds free, free of the white man's rule. [....] But don't you ever let their hatred cause you turn upon yourself. You've got to be a good friend to yourself. Your self-respect is the most precious thing you'll ever have." Uncle Ned pg. 103-104

Beyond Freedom tells the story of fifteen year old Matty Warren Smith who is growing up in Boston (specifically the neighborhood of Beacon Hill) during the War of 1812. She is a former slave, but she was freed along with the rest of her family when she was five and doesn't remember being a slave. Now that she's older she starts experiencing various forms of racism and realizes that white people look down on her and some will never respect her or her people. She makes a white friend who offers her employment in her Beacon Hill mansion and this experience is eye-opening.

I had a hard time believing Matty was fifteen, she seemed very naive and lived in her own bubble, protected by her family. I'm not sure if that is entirely realistic of the times, I find it very hard to believe that she never experienced racism until she was fifteen, I mean slavery still existed during her time so she must have had some experience of it early on (especially as a former slave). I thought Matty acted a bit immaturely or thought very simplistically about solving a problem, not recognizing the complexities that come with the choices she makes. Also, Matty knew her whole family history, including dates. Now I understand how stories get passed down from generation to generation, but she knew the story of her slave ancestors from Africa (born in Barbados) along with the dates of when they arrived in America (1730) and the ages of her various ancestors. I don't think that's possible, how would an uneducated slave from Africa/Barbados know how old she or he was and how would they know what year they arrived in America? They weren't educated and I'm sure the slave masters just guessed about their ages and didn't really care. I felt that this was historically inaccurate and the way it was told wasn't very original. Matty tells the story of her ancestors to her white employer's daughter, Lydia and I felt like the author just used Lydia as a prop so the author could explain Matty's family history. I also would have liked to see how African Americans felt about the War of 1812. Matty and her family live during this time, but they don't mention it. Her white friend and employer don't even remark on the war, it's as if they forgot it was going on (which makes some sense, but there were naval battles and Boston is a city close the water so the ships would have been going to war).

I did however really like the setting of this novel. I learned a lot about what life was like for freed salves in the North during the early days of our nation, way before the Civil War (1812). I think we tend to forget that discrimination happened to African Americans in the North, even those who were never slaves. I never knew that African Americans were not allowed on the Boston Common! Also, they weren't allowed to be mail carriers or be without a job (as if it's their fault that white people's prejudices won't allow them to be hired). I also really liked the fact that while this book was self-published, there were no careless errors like confusing typos or misspelled words. The relationship between Matty and her white 'friend' Lydia was very realistic. It's a classic example of white privilege and 'clueless white person' and that's something all African Americans (actually, all people of color) have to deal with. Lydia means well, but her actions only make things worse for Matty.

The historical aspects of this novel were good, but I don't think it will appeal to much to the older teenager. While the main character is fifteen, she acts more like a pre-teen and that can be exceedingly frustrating. Also, I'm not sure if too many people would be interested in the story unless they really like reading about history and African Americans because the story was slow-moving and nothing really happens (a few incidents here or there, but most of the the time it felt like history facts were just being spouted). The history lover in me was entertained, but the teenager in me was not so entertained. For that reason, I don't feel I can give this book a higher rating, as much as I want to. A book that only appeals to one type of reader is not recommendation worthy except to those it would interest. However, I would recommend the book to all historical fiction facts and anyone who wants to learn more about African American. The book is being taught in many New England schools and I think that's great, it's a story that needs to be told and the purpose of Fall Rose Books is to shed light on lesser-known chapters of early African American history which is a wonderful idea.