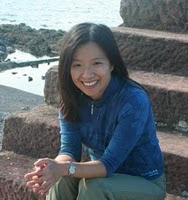 Everyone please welcome Y.S. Lee to Reading in Color! She wrote The Agency: A Spy in the House which will be a trilogy. Read my review here. You can follow the rest of the Traveling To Teens tour by going here (and I highly recommend you do, the guest posts on Victorians are fascinating! I've learned so much).

Hello! This is the 3rd of 8 guest posts I’m making as part of the T2T blog tour. As an ex-professor and writer of historical fiction, my theme is Things You (Probably) Didn’t Know About the Victorians. Yesterday, I talked about Extreme Child Labour at Books by Their Cover. Today’s topic is Victorians of Colour.

First, off, breaking news: Victorian England was not lily-white! Not in major cities, at least, and especially when those cities were port towns like London, Bristol, and Liverpool. Regular readers of this blog may be rolling their eyes at this point: “Um, OBVIOUSLY.” The problem is, you’ll have to read very carefully, and for quite a long time, before the fiction of the Victorian age starts to reflect that reality.

Exceptions: Thackeray’s Vanity Fair features a handful of very minor characters with brown skin; there’s a much-abused servant in Dickens’s Dombey and Son who’s known only as the Native; and there’s the theory that Heathcliff might be Romany (because he’s found in Liverpool, and kind of swarthy, and yeah, that’s it). But there ain’t much else. And the POCs you see in these novels are either incredibly minor characters (practically throwaway lines), or else objects of abuse or ridicule. They’re the victims of the authors’ racial, and frequently racist, assumptions.

So when I started to imagine my novel, The Agency: A Spy in the House, I included a population I’d stumbled across in my PhD research: Lascars, aka sailors from the Asian subcontinent. Some were simply passing through London between ocean voyages; others chose to settle down, marrying English women and having families; others still were stuck in England, unable to find passage back to their home countries. For this last group, there were actually specific charities that aimed to help them (and convert them to Christianity at the same time). The “Imperial Baptist East London Refuge for Destitute Asiatic Sailors” mentioned in Spy is parody of their usual tone.

Now, London is actually a network of tiny villages: you could grow up in the East End and never leave it for years, so it’s quite possible that a sheltered girl (like Angelica in my novel) could grow up five miles from all these South Asian and Southeast Asian sailors and never realize they existed. But some of them – or their wives, and especially their children – must have journeyed through the city at some point. And Spy is a novel about those possibilities, too. But enough said, for now. I hope you enjoy the book!
I always thought of Victorian England as lily-white so it was super interesting to hear that it did actually have some color and different cultures! Thank you Ms. Lee :)
Visit the author's website and everyone needs to go pre-order the book. Also the author is having a launch party in Ontario, check it out for more details.
Posted by MissA at 3/06/2010 12:57:00 PM