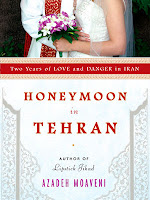 Honeymoon in Tehran: Two Years of Love and Danger in Iran by Azadeh Moaveni 2009

IQ "I wondered whether most Americans had any idea how the actions of their government influenced the lives of those across the world. Iranians had a long, sophisticated tradition of conducting their own opposition to autocracy. When would Washington realize this, and allow Iranians to resist their tyrants in the manner of their own choosing?" pgs. 245-246

In the sequel to Lipstick Jihad, Azadeh Moaveni is living and working in Tehran, having finally adjusted to the many nuances of life in the Islamic Republic. The author notices vivid contrasts, the people of Iran want openness with the West and civil liberties. But if that is the case, how did the conservative , anti-west Mahmoud Ahmadinejad win the 2005 election? In addition to the surprising political turn, Azadeh falls in love, with an Iranian man. They decide to get married in Iran and raise their future family in Tehran. Her upcoming marriage coincides with the Iranian government once again bearing down on 'immodest dress' for women and there is increased intimidation of journalists, especially ones who write for Western newspapers and magazines. Then the unthinkable occurs, the author discovers herself to be pregnant before she is married. The punishment is 100 lashes and one year of banishment. The author must decide to stay in Iran or leave for the West, does she really want to raise her future children in Iran?

There's a lot of information in this book, much like in the other, although there are some natural extraneous details, but to me that added an even more personalized touch. I think another bit of information worth keeping in mind is that besides being the perspective of one Western-educated woman, it is also the perspective of an upper middle class woman. Class plays a big role in Iranian society and this is not the best of books if you want to learn about daily life for the working class (something I'm now interested in after reading this book). Something worth keeping in mind as well is that this book is very slow-paced. As someone who has discovered a passion for the Middle East (and as such I'm willing to read anything I can on those countries) I eagerly read through this book, but if I wasn't so personally enamored with the topic, it probably would have taken me much longer to finish.

Most importantly if the reader has read Lipstick Jihad they will notice immense growth in Ms. Moaveni. "When I first arrived in Iran, fresh and green from northern California, I had obeyed like a schoolgirl in such situations, naively deferential to authority, certain the worst could not happen to me, of all people. Only when the worst (arrest, near arrest, public humiliation and so forth) befell me, repeatedly, as a result of my submissiveness, did I learn to respond like the Iranian young people of my generation: with loud, shrill confrontation. This was the rather simple trick by which my friends; indeed, most young Iranians-managed to evade the bullying ways of the Islamic system: by shouting down its enforcers, daring them to engage in hostile, full-fledged confrontation. It sounds counter intuitive, but it was actually effective. Very often the authority figure in question was either too young, cowed, bored, or poorly paid to deal with an angry female whose shrieks typically gained her the solidarity of passers-by" (pg. 96). I really like this quote because while it very summary-ish, it gives a peek at the change Ms. Moaveni goes through, a change that is well worth reading about. Another intriguing aspect of the story concerns falling in love in Tehran, what life is like for dating couples, for those who just want to hook up and married couples. It's not as restrictive as one might suspect but it's no America.

Honeymoon in Tehran addresses one of the toughest questions future-parents must make, do I really want to raise my child in my home country? In my opinion that is an extremely difficult decision and the author takes great care in weighing the pros and cons of raising her children in Iran. She doesn't want her son to be confused because while at home she could tell him that women are equal to men, Westerners aren't all evil, etc, at school it would be a different story. Furthermore there's a chance that a young child will accidentally let something slip about private family life that is technically against shari'a (Islamic law). Such as 'Mommy made fun of the Ayatollah', the risks are great. At the same time she loves Iran, the people, the beautiful landscapes, the passionate discussions (I'm so jealous of this fact. Debates are a big part of Iranian culture and it seems to me that they manage to passionately argue politics without really offending anyone. That would not be the case in America unless Iranians simply don't discuss controversial issues such as abortion, gay rights, etc because it's a moot point under their theocratic government?) and she has made many friends there. The author's love of Iran is clearly reflected in this book and I personally hope I never have to make a decision like that because there's a downside either way. I also appreciated how this book tried to explain how Ahmadinejad was elected. The author chronicles everyone's surprise at his win but she also notes that many of the people she talked to decided not to vote. Neither one of the author's two books are political, when discussing matters of politics the information is presented in a straight-forward manner with diverse viewpoints. The heart of the story however concerns relationships and how they have been both hurt and strengthened under the Islamic Republic. A fun, informative story for those who like international politics (but not too in depth) and simply reading about other countries.

Disclosure: From the library

PS Fun fact (or not) the author is friends with Shirin Ebadi, in fact she co-authored (and I believe translated) Ms. Ebadi's memoir, Iran Awakening. You can find my lukewarm review here