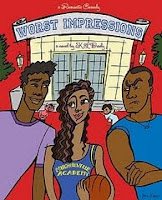 IQ "How many people in the world would be happier for you than you'd be for yourself?" Liz pg. 244

A retelling of Pride & Prejudice with an all Black cast. Wait. Let's just take in this *moment* A quality Jane Austen retelling that features a diverse cast. The first of its kind and it's for the YA set, for the girls who at this age are usually first introduced to Jane Austen. I don't want to digress too much but NONE of my Black friends have read Jane Austen, neither has my mother nor her Black friends. I'm going to 'go out an limb' and assume that it's because teachers don't think we would be interested in Jane Austen and/or we don't have any interest in reading about a lilywhite 19th century English world where everything ends happily and the dialogue is a bit hard to follow and the romance is seemingly chaste. I'll leave it at that but I'm definitely writing a future post about this. I'm not even that big a Jane Austen fan myself. I've read 5 of her 6 books (including Pride & Prejudice) but I don't have undying adoration for any of them (Pride & Prejudice comes close as does Sense & Sensibility, I'm not a romantic so Persuasion doesn't do it for me but that might be changing...) *ahem back to review!*

Liz Bennett is an excellent basketball player whose mother won't let her play on the team. In fact, there's very little her mother will let her do, besides push her to get good grades and STAY AWAY from boys. Her mother has her hands full trying to make sure Liz, her older sister Jeni and her two younger sisters Kat and Lydia. Kat and Lydia are boy-crazy, Jeni gets all the boys but doesn't care and Liz just wants a nice guy. But they all question her sexuality due to her basketball prowess and baggy clothes so she doesn't give many of them a chance (or they just aren't worth talking to). Enter Trent Whitman, who really likes Liz and actively pursues her. He compliments her often and Liz might even go all the way with him someday. Then there's Darcell Williams the handsome star football player who insults Liz in front of everyone at Homecoming. He's a jerk and he knows it. It's only after a Bennett family crisis that everyone's true colors are revealed and maybe first impressions are right, maybe they're wrong.

There were some Pride & Prejudice updates I liked, some I didn't. I didn't like the Trent storyline. I felt that it was trying too hard to connect Worst Impressions to Pride & Prejudice and the whole thing ended up being unbearably dramatic. In fact that was a main theme of this story, lots of over the top drama and cheesy dialogue. I wanted to tell all the characters (parents and teens) to just take a breath, it's not the end of the world. What was most disappointing was the end. The romance was so fast and suddenly Liz was IN LOVE. Then we have to fast forward to the college decision process. However while I disagreed with a certain character's choice, I do think that some teens would do that (but it's a mistake I think to pick a school based on where your boyfriend or girlfriend is going). Furthermore while Mr. Darcy can say some rude things, I don't think he compared to Darcell. Honestly there were no redeemable qualities about Darcell in my opinion, which was disappointing.

All that being said, I laughed out loud so many times reading this book. SO MUCH FUN! Liz is quick to bring the quips, snappy comebacks abound. You also can't help but laugh at how easily avoidable and/or very dramatic certain situations seem to be. Liz's voice rings true and it resounds off the pages, full of life. Her reactions and actions were genuine, she didn't try to act overly brave or tough, she was at the happy medium.
"'You got me? You live in the same neighborhood I live in. You don't know a dang thing about the ghetto. What're you gonna do, hit 'em in the head with a football?' [Liz]

'I saw Boyz in the Hood three times'
'Why didn't you say so before? Now I feel safe...not'" (pg. 212) That line set me giggling until I shortly thereafter came to the next amusing line.. "'Who is it?' Trent yelled
'No esta aqui' I hollered back.
Okay was it stupid to yell, 'I'm not here' in Spanish from the wrong side of the door? Absolutely. But I was scared shitless and couldn't think of anything else to say. Seconds later, the door opened." Liz (pg. 212) Besides Liz having a strikingly real voice, I liked the twist on Mrs. Bennet. She goes from one extreme in the original P&P (trying to marry off her daughters) to the next (trying to keep her daughters from discovering boys their own age, especially athletes). Mr. Bennet was true to the original, doting on his daughters and steering clear of his wife.

Worst Impressions is one of I hope many more to come Jane Austen retellings with a diverse cast. This book will probably make more teens laugh out loud then the original...While at times the author's attempts to make the retelling work in modern times seemed to be a bit of stretch (see Trent storyline), at others time it worked (the parents, Liz's quick wit). If nothing else read this book for the humor alone, especially for teenagers who recently took the ACT and/or are preparing for the SAT or AP tests....

Disclosure: Received from author for review (with lots of excitement on my part)