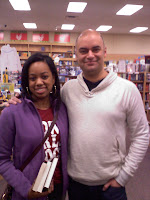 On March 1, I attended an event at Anderson's Bookshop in Naperville, Illinois. This was my first YA author event (my first ever author event was when I met Chimamanda Ngozi Adichie), the author was Sarwat Chadda and I was incredibly nervous. Especially since I've interviewed Sarwat (via email) and talked to him on Twitter. I may not sound 'cool' or whatever online but in real life, I'm so much quieter around strangers. Obviously it's a lot easier to 'talk' to people online, well by people I mean authors and other book lovers. I don't talk to random people! Plus I'm so in love with Sarwat's books (I even plan on writing a college admission essay on them) but I was worried that I wouldn't be able to get that across.

I shouldn't have worried because Sarwat is even funnier in real life than he is in person and so incredibly nice. we didn't have much time to talk since it was a school night and Naperville is not (contrary to how the event was advertised) in Chicago, it's an hour away so my dad didn't want to stick around for long. We were late to the event (started at 7) due to the fact that my dad didn't have much faith my ability to drive to Naperville so I had to wait for him to get home from work. We walked in to Sarwat jumping around and drawing/writing on a big piece of paper. He was having the audience create their own opening scene for Devil's Kiss. Sarwat presented the characters; the young boy, Billi and Arthur and the audience had to imagine how the scene would play out. Fun to listen to, and of course, it had to be acted out. The event was also with Rachel Hawkins, who I was quite familiar with. I'd seen wonderful reviews of her Hex Hall and I ended up buying a copy because in addition to being utterly charmed by her presentation and kind personality, I remembered Jodie's review and how I said I would read it and that was almost a year ago...*ducks head in shame* Witches, and a lesbian best friend who is not defined by being lesbian. Count me in!

After the event Sarwat and I chatted for a bit, but not for too long because he had pie waiting for him and I had....homework. I'd never been to Anderson's Bookshop but I was in awe of all the author events they host and there are so many books! It would be my favorite indie if it only it was closer :( Anderson's gives authors who do presentations one book of their choice and Sarwat asked for my recommendation. I knew he was big on blood and guts and I wanted to stick to YA paranormal (and he'd already read Cindy Pon) so naturally I proposed....Dia Reeves. No-brainer. He ended up getting Slice of Cherry and I sincerely hope he likes it. I need to start SoC! (before someone claims it for the poc reading challenge ;) We also chatted a bit about the college process in America versus in England (it sounds A LOT more intense). We also talked about my being an author. I said no, but also had to admit that I hadn't tried since about the 5th grade to actually write a book. Sarwat didn't think I could shoot down the idea (please note I'm paraphrasing here, imagine someone saying this in a more eloquent manner with a slight British accent. I didn't think it was that heavy actually) until I sat down and tried to write a book. I'm pretty sure I'll write the beginning and the end and get bored/impatient with it, but I'm willing to try. Over the summer. I said I was leaning towards being an agent (if I didn't go into politics but hey this blog kinda ruined that career, my own fault. There is so much political fodder on here) but he suggested being an editor based on his experiences dealing with both. Not because being an agent wouldn't be awesome, but because based on how I described what I wanted to do, it sounded more like an agent's job. I hate grammar, but my friends are always giving me their essays to read, but I think that's just because I can catch a few spelling mistakes and help them be more concise. But that's for schoolwork, I'm not so sure if I could really help fine-tune a BOOK. I would however love to be in a position in which I can publish more authors of color. Agents get to champion those aspiring-authors but they don't get to decide if the book will be bought by a publishing house. I think I may want to be in that position. We shall see. Sarwat and I also discussed racism in publishing (we didn't have enough time to go into much detail), the need for Billi #3 (I swear if it doesn't happen...well yeah) and a possible movie deal.

Anyway, please ignore me in the photo. I'm wearing a shirt that says Brown Girls Rock! It has a double meaning for me. One of my dream schools is Brown University (not to be rude but do save your breath, my chances at getting in are so very very slim) and of course, I'm Brown ;) All in all, it was a fabulous event with two great authors. Sarwat and Ms. Hawkins complemented each other perfectly (and not just because one had a British accent and one a slight Southern one) and I hope to be able to attend more author events and not be so shy!