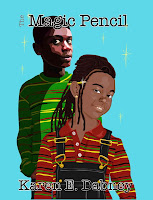 IQ "I call myself speakin two languages: standard English and what some people call Ebonics. I don't like that name cuz it sounds like a joke. My mother says 'Black Relaxed Language' cuz every culture has its own style. (Sometimes I tease her and call it 'slanguage!') For us it's the way most African Americans can speak or usely understand when they hear it. " Malcolm pg. 22

This is the story of Malcolm Bakersfield and the new girl, Nia. Nia's pencils appear to have magical powers and Malcolm is determined to confront her about it. Along the way, he's going to learn things about what it means to be young and Black.

This book is trying way too hard. It's a jumble of messages about being proud to be Black, the importance of doing well in school, not watching much television, etc. It's way too preachy, there is no subtlety here. I constantly felt as though I was being hit over the head with messages about getting rid of the assumption that people who Black English aren't educated, that we should be proud of our Black history, etc. The author even tells us that Malcom was named after Malcom X and his older brother, Martin, was named after Martin Luther King Jr. I honestly couldn't help roll my eyes and say 'of course.' Every single part of this book makes a point and while I appreciated the point about Black English, I wasn't a fan of the book being entirely in Black English. It's not like His Own Where, in which the English adds to the story and the setting. In this case, the language detracted from the story (just my opinion). Constantly seeing "havetuh" and "an" (instead of an) drove me crazy. I understood exactly what was going on but I winced every time I read it the grammar. I realize there are people who talk like that, (I use a lot of slang myself) but for that language to run throughout the entire book was just frustrating, I wanted to correct it. I do feel bad for saying that though because who decides what's proper English? Regardless, I've fallen into that way of thinking, that lots of slang and incorrect spelling isn't proper. Especially as a Black person, I don't think we should speak that way around white people, we still need to put our best foot forward. To top it all off, Malcolm is perfect. There's nothing more frustrating than a perfect character. He's smart, good at soccer and basketball, handsome and caring. He's good to his mother (which presented some annoying scenes as well. Malcolm's mother teaches him how to cook and step-by-step is explained, this dragged the book down). I needed some flaws because real perfect people like Malcolm don't exist.

Malcolm is one of the most knowledgeable sixth graders I've read about (I think Malcolm was in sixth grade), sadly this book shows that through info dumps. In one scene, Malcolm is playing soccer and trying to be like Freddy Adu. I liked that reference. Then the scene was botched (in my mind) when Malcolm's father goes on to talk about Pele, George Weah, Steven Appiah and Michael Essien. I appreciated learning those names (I'd only known of Pele) but from there the father goes on to talk about how George Weah is from Liberia and then he talks about the history of Liberia and it was just too much. I liked learning about everything that was mentioned, virtually every aspect of the Black experience is portrayed through Martin's family and friends. This opens readers eyes up to the various Black perspectives, we aren't just one group with all the same opinions and circumstances. I liked that but I didn't like that everything was so obviously striving to make a point.

The Magic Pencil would be a good reader for younger children. Teachers could discuss many of the things and people brought up in the book, I'm not so sure younger kids would mind all the information being thrown at them. I had a problem with it because it read like a lecture or history boo, I would have preferred all this information being presented to me in a more creative way. The mysterious pencil was a cute idea but I was too bothered by everything else to fully appreciate it. This is not the right book for me, but it might appeal to other readers. Yes Malcolm and Nia are fantastic role models but they are perfect. How can anyone relate to kids so perfect? They talk about how they don't like the images of Black people on TV, the dangers of the Internet, the n-word, slavery, reggae, etc. My eyes were opened to many new things but I was overwhelmed by all that was discussed and how the subject matters were handled.

Disclosure: Received from author. Thank you!

PS I did like another quote from the book "He an Mom been together for almost a year. I think they might get married; then I'll be a stepson. I wonder how many steps I'll havetuh climb before I really feel close to Mr. Jamal Musa Hayes." Malcolm pg. 56
Posted by MissA at 12/28/2010 01:25:00 PM