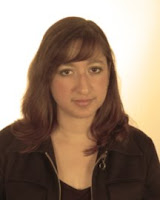 This is my 2nd Elated Over Eleven interview. This is a feature I started in which I interview YA/MG 2011 debut authors of color. Kelsey at the Book Scout was part of my inspiration for the idea.

Today I'm thrilled to present an interview with Sarah Jamila Stevenson, the author of The Latte Rebellion. The Latte Rebellion releases on January 4, 2011. Keep reading to learn about why mixed race people are called lattes and how we balance cultures.

Hi Sarah and welcome to Reading in Color! Please tell us about The Latte Rebellion

The Latte Rebellion is about a moneymaking idea that spirals out of control; then hilarity ensues. (Hilarity always has to ensue when your scheme goes awry, right?) Asha Jamison, the narrator, and her best friend Carey—both high school seniors of mixed ethnicity—use an unpleasant racist incident as the springboard for their idea: they start a fictitious club (the Latte Rebellion) for students of mixed race, and the money they earn from selling t-shirts is funneled into their post-graduation vacation fund. But the Rebellion gains its own momentum, and as Asha gets more and more involved, her friendships and her academic career are put on the line, forcing her to make some difficult choices about what she believes in and who she wants to be.

Time, persistence, and hard work! That's the short answer. It isn't an easy or predictable road, and there's no magic formula, but you have to have those three—and probably a healthy dose of luck and good timing—to succeed in the writing field, and in the arts in general.

Taking creative writing classes really helped me develop that persistence and discipline. I got a lot of valuable advice about my work, and about the writing life, while in graduate school for fiction writing. But ultimately, here's what I did to get published: I sent my work out. I got rejected. Again. And again. And again. I revised my work some more. I wrote new things and sent them out. I got rejected some more. Until one day, about four years into it, somebody said yes. I'd been sending The Latte Rebellion to agents and editors for about a year and half before it was accepted to Flux. The whole "breaking in" thing is still kind of mystifying to me.

In The Latte Rebellion, mixed race people are called 'lattes' by the main character. How did that term come about?

Like my main character, I was probably drinking a lot of coffee! I was in the car, on a long drive back from visiting my parents, when the phrase "latte rebellion" popped into my head. (Fortunately, my husband was driving.) I jotted down a few notes with the bare bones of an idea—Asha, a half-South-Asian girl, decides to start a movement called the Latte Rebellion. I don't think I made the conscious connection between lattes and mixed ethnicity until a little later, as I brainstormed some more. All I know is, there was a post-it note on the car dashboard that said "Asha" and "Latte Rebellion", and the next thing I knew was, it was National Novel Writing Month and I'd written half the book.

Wouldn't it be awesome if people of mixed race started calling themselves 'lattes'? Non YA-readers would be so confused :p I'm not a coffee person but maybe this book will convince me to try it!

bright ideas of her own. Or Sherri Smith's Hot, Sour, Salty, Sweet—talk about a melting pot of mixed ethnicities! Or maybe Shine, Coconut Moon, by Neesha Meminger. Sorry, I guess that's three...

The more the merrier, your book is just a playa! I keep meaning to read Fat Cat. And Hot, Sour, Salty, Sweet has been on my wishlist for forever, I need to get on that. And I adore Shine, Coconut Moon :)

Mixed-race people often feel torn between cultures (or at least speaking for myself). Did you experience this yourself? If so, which culture did you lean more towards and how did you learn to reconcile both cultures?

Yes and no. In some ways, I was very much NOT confused, because I was born and raised in California, and I always felt very American in all the ways that count. At the same time, it can be complicated to figure out who you are in relation to the different sides of your cultural identity. In many ways I identified more with my mother growing up, with what I saw as the more mainstream side of my heritage.

It wasn't that I felt conflicted about being of mixed heritage, but I have to be honest—there were times while I was growing up that my father's Pakistani cultural traditions felt like an obstacle to my desire to be a "regular" American girl, to do what my friends were doing, to live life like the teenagers I'd read about in books. It was hard for me to cope with the dos and don'ts that were probably perfectly reasonable to him, from his point of view.

And I think I'm still working on reconciling the two cultures, weaving the two together in ways that fit me as an individual. Being married to someone of mixed ethnicity really helps, though, and I'm close to my in-laws, too—having an understanding support network has been so valuable. I'm probably not done exploring the topic, though. I think I'll always be mulling it over, meshing the two sides together in new and unexpected ways as my life continues forward.

I can relate to identifying with the more mainstream half of your heritage. So I may be one of the few people who is conflicted about my heritage (but I'm getting better!) ;) Slightly disappointed to hear that working on balancing both cultures is a life-long act, but like you said, it will be fun to see the new and unexpected ways the two cultures manifest themselves in our lives.

I'm a huge fan of fantasy and sci-fi—some recent fantasy reads that I really enjoyed include Fire by Kristin Cashore and Sacred Scars by Kathleen Duey. (The main character of Fire is mixed-race, too—she's half monster!) I really love the Chaos Walking trilogy by Patrick Ness. I also recently read The Ghosts of Ashbury High by Jaclyn Moriarty, whose books are truly hilarious.

As for '11 debuts, I'm so horrible at keeping up with these kinds of things (as you can see, most of my "recent" reads are a bit behind) but Jessica Martinez's Virtuosity sounds intriguing, as does Beth Revis's Across the Universe, and The Bestest Ramadan Ever by Medeia Sharif.

The cover of Across the Universe is brilliant! I love it. Virtuosity does sound really good and I'm quite looking forward to reading The Bestest Ramadan Ever. I feel as though Jaclyn Moriarty is one of those authors that everyone should read, I certainly intend to give her books a go.

What two PoC literary characters would you love to hang out?

Sticking with a YA theme, I'd definitely hang out with Samar from Shine, Coconut Moon, or Eunice "Bug" Smoot from David Macinnis Gill's Soul Enchilada.

What is one issue you have with YA/MG? What is something you love about YA/MG?

I have an issue with the way YA/MG books are sometimes marketed, especially when the cover art or marketing verbiage is so overly targeted that it has the effect of limiting readership—books that might appeal to both girls and boys having a cover that would make boys embarrassed to read it, for instance. Or the whole "let's keep people of color off the cover so it will appeal to a wider audience" debacle, which frankly is a terrible argument in my opinion--but then it's just as bad when a book with a non-white person on the cover gets relegated to the "ethnic interest" section of the bookstore.

I love the coming-of-age aspect of YA/MG books—I may be far from my teen years, but I feel like great YA or MG novels can always teach readers something new about growing up and learning who you are. The way I see it, the process of growing up never stops, and I'm still figuring things out. :)

For information about me, they can visit http://www.sarahjamilastevenson.com – the site's under construction, but should be finished within the next few weeks.

I have two blogs: Finding Wonderland, a blog about reading and writing YA books which I co-write with author Tanita S. Davis, and my personal blog, Aquafortis (http://aquafortis.blogspot.com). My Twitter handle is aquafortis, too