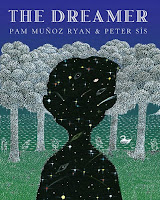 IQ "Without them there, Neftali lingered. He found a stick and defiantly wrote giant words in the damp sand. Neftali dropped the stick, feeling a peculiar sense of ownership. He spread his arms and listened to the ocean's thunderous applause. He bowed. The ocean was now his audience." Neftali, pg. 234

The Dreamer is a creative look at the early years of Neftali Reyes, aka, Pablo Neruda. Neftali is often sick so he misses school. While he stays at home, he likes to daydream while looking outside his window. His father wants him to become stronger, so he pushes Neftali to go outside. Neftali is happy to oblige because he loves to explore, but his father is not pleased when Neftali comes back with seashells and other interesting things he finds lying around outside (he has quite a collection). His father is harsh (he hates to see Neftali read or write) and Neftali has no friends at school. His stepmother is a doormat and his older brother (his protector) will soon be leaving him. All Neftali has is the lush Chilean countryside, his books and imagination.

Is it a coincidence that in my Spanish class we had to read and translate one of Pablo Neruda's most famous poems, Tonight I Can Write (or as it's known in Spanish, Puedo Escribir) right after I finished reading this book? I hope to one day be fluent enough in Spanish so that I can read his poetry in its original, beautiful form. I have to admit, my biggest qualm with this book was the magical realism. It was a nice touch to be sure, but I was expecting more biography. I came away from this book thinking that I really didn't know that much about Pablo Neruda, which was disappointing since I didn't know much to begin with (although I did learn about why Neftali Reyes changed his name to Pablo Neruda). Or at least, not as much as I wanted to know. Plus I'm not sure what's fact and what's fiction. This was unfair on my part because I expected something different from this book, but nevertheless, my expectations influenced my feelings on the book.

That being said, the magical realism allows for the author and illustrator to be truly creative. In The Dreamer, Neftali daydreams that words lift off pages and out of drawers (he keeps a drawer filled with his favorite words) and the drawings and poetry throughout this book seem to do the same. Perhaps the best way to describe the writing is by using the author's own words, "The rhythm of his rain-soaked childhood became a sequence of words. His memories of the understory of the great forest burst into lyrical phrases, as resinous as the sap of a pine cone, as crisp as the shell of a beetle. Sentences grew long, then pulled up short, taking on the tempo of the waves upon the shore, or swayed gently, like the plaintive song of a lone harmonica." (pg. 344). She is describing the work of Pablo Neruda, but this could just as easily be referring to her writing in this book. The drawings help the reader to better visualize what Neftali sees in his daydreams and they are extremely well done. They are whimsical in nature and make this book one that you will want to keep on your bookshelf, if only to look at the 'pretty' pictures (of course the writing is exquisite as well).

The Dreamer is not going to reflect much on Pablo Neruda's adulthood. It does talk about his childhood and his demanding father along with his complacent stepmother. However I wasn't stasifeid with the information shared about his family. I wanted more! What happened to his mother? Why was his father such a jerk? Granted Neftali is a young boy for most of the book so he may not know the answers to the questions that I ask (and I could and will look them up). The setting of Chile comes alive through both the words and the drawings. In fact, I would say I learned more about the geography of Chile than I did about Pablo Neruda. Which may not be such a bad thing. Not only did the book extensively cover Chile's landscapes and animals, it also discussed the issue of indigenous people being forced off their homeland. In Chile, the Mapuche people had been there for hundreds of years and yet Chileans were trying to kick them off their land and create more businesses and homes. They refused to work WITH the Mapuche merely because not all the Mapuche spoke Spanish or knew how to read and write. The issue of native people being forced to leave by foreigners is (sadly) nothing new, but it was new to me in that it occurred in Chile and I found it quite enlightening to read about. This book is filled with memorable lines and I want to share one more with you "I will start by writing more stories, stories that might make people whisper behind closed doors. Did you know that many whispers can make a very loud noise?" (pg. 307). These words are said by Neftali's uncle, Orlando, but I think it's safe to say, Pablo Neruda's poetry also started whispers that created a loud noise (after all the government did invade his home). Furthermore, there are whispers that The Dreamer is a strong Newbery contender. My guess would be a Latina has never won the Newbery, but I can't say for sure. The only other rumored Newbery contender I've read is One Crazy Summer by Rita Williams Garcia and I would be happy with either one winning.