Incredible Quote "Who doesn't talk to someone in their heads? Who doesn't talk to God, or a pet, or someone they love who has died, or maybe just to themselves? TH [Tony Hawk]...he wasn't me. But he was who I wanted to be, so that makes him the best version of myself, and that can't be a bad thing, to have the best version of yourself standing there on a bedroom wall and watching you. It makes you feel as though you mustn't let yourself down." Sam pgs. 8-9

Sam's life has slammed into a wall. At first everything was going swimmingly, his teachers talked about college and thought he might do well on his GCSEs, his mum had gotten rid of her rubbish boyfriend and he has a girlfriend, Alicia, who could be a model (and aspires to become one). Alicia and Sam are completely enamored with each other, Sam neglects his skateboarding and Alicia no longer hangs with her friends. Neither one of them spend much time with their parents anymore. The only constant in Sam's life since dating Alicia is that he still talks to Tony Hawk, his idol. Then the wall pops up, the wheels come off the truck but luckily, Tony Hawk has advice for every situation (Sam has read his book Hawk-Occupation: Skateboarder several times over). Whether or not it makes sense is another story...

Now ok, the summary of this book is really vague so I'm just going to go ahead and tell you: Sam gets his girlfriend pregnant. I don't think that's a spoiler because that's what the rest of the book is about and it's really obvious from the first few chapters. It's key to this story and what I liked most about the book has to do with the portrayal of dealing with pregnancy from the male perspective. I didn't like how slowly the book dragged on, I appreciated getting to know Sam's life, but I think bits and pieces of his life could have been shared through dialogue and short flashbacks. I also felt like characters outside of Sam and Alicia's family only existed to carry the story along or provide comic relief. Rabbit is hilarious (I honestly can't comprehend someone being so...unintelligent?) but he never develops into an interesting character and I had hoped he would. His story could have been absolutely engrossing but then that would have taken away from Sam's story. There was also some random dreams that I suppose could be called magical realism since Sam goes to the future and what he sees actually happens but...it was bizarre and the story could have moved along just dandy without the dreams.

This is the second book I've read about teen pregnancy from the perspective of the father (The First Part Last which I don't think any book can hold a candle to) and it has a rather dry sense of humor towards the whole situation. Sam is sarcastic and that's my absolute favourite kind of character. He's also 99& authentic teenage boy (I left out 1% because I'm not a boy so I can't be 100% sure) or at least 100% teenager. Sam tries to (literally) run away from his troubles, he makes stupid decisions, he realizes he has made stupid decisions and then he makes stupider decisions. A contrast is shown in that while Sam can run away, running away is not an option for Alicia. I also found it most refreshing that Sam looks up to an athlete but he isn't under any illusion of grandeur, he's not trying to go pro, he just loves being a skater (which is what skateboarders are called don'tcha know) and therefore, he loves Tony Hawk. There's also some class issues occurring. Usually a girl's parents don't think any guy she dates is good enough for her, but Alicia's parents really believe that, they don't think Sam has a future. They look down on Sam and his mother because Sam's mother had him when she was sixteen (about the same age as Alicia and Sam), they think it's a cycle and even though it takes two to tango, Sam gets all the blame. *SPOILER: Highlight to read* The end bit in which they argue over the last name? SO FUNNY. As if a last name like Jones or Burns will determine how far you go in life. I actually laughed out loud at that part. It also made me mad that Alicia's parents thought based on sharing Sam's last name, their grandchild wouldn't be successful.* End of Spoiler* The conversations between Sam and his mother are great, they are both very funny, very sarcastic and it almost makes me wish my mum and I were closer in age.

Slam is a thoughtful, dry tale of teenage pregnancy from the perspective of the guy. This novel stands out not just because of the point of view, but because Sam's love of skateboarding is always present and because Tony Hawk encourages him to be his best self. Although really, Sam doesn't need the encouragement. He's going to get a face full of gravel at times (oo is that skateboarding lingo?), but with the help of Tony Hawk, Alicia, his mum, Roof (awww) and even Mark, he will become an excellent father. There is a very telling conversation (paraphrased) in the book between Alicia and Sam in which Alicia gets mad that Sam always asks 'what are YOU going to do?', she wants him to use 'we, what are we going to do?' but then he observes that 'we didn't get any say in whether or not you are even keeping the baby'. Alicia retorts that it's all up to her until the baby comes out because it's her body. It's not preachy, but it's not entirely subtle either, regardless it's a revealing conversation. This is a story infused with light heartened moments that come as a result of a heavy topic that forces teens to grow up fast. To me this book says that it's our fault, but it's not a death sentence and we do have options. 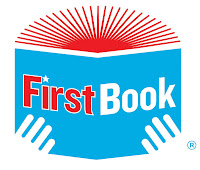 PS In the spirit of the novel I tried to insert various bits of slang and English grammar in this review ;) How'd I do?

PPSS This review is for First Book Blogger Book Club which I talked about here and you can find links to the other reviews here, First Book distributes books to children who may not otherwise have a chance to own very many. What an amazing cause.
Posted by MissA at 2/28/2011 09:25:00 PM