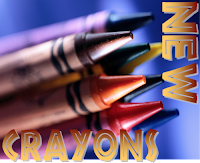 New Crayons is run by Color Online. To participate, share what multicultural books you got for the week.

Does anyone know of a holiday read-a-thon that's running? I desperately need one but I can only do it on Christmas Break. If there isn't one, I'll just start my own. Anyone can join and it would probably be from December 19-2o.

From Trish, who is one of the most generous people I know. Thank you, thank you! 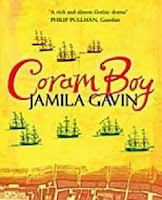 Otis takes babies and money off desperate mothers, promising to deliver them to the Coram Foundling Hospital in London. Instead, he murders them and buries them by the roadside, to the helpless horror of his mentally ill son, Mish. When Melissa, beloved of Alexander Ashbrook and daughter of his governess becomes pregnant by him, her mother arranges for the Otis to take the child, telling Melissa it was stillborn. Alexander, not knowing Melissa's condition, has fled his home for a career in music. But Mish manages to save Melissa's baby, Aaron, and he grows up with Toby, the son of an African slave, inseparable friends. Toby is a plaything at the house of rich Mr Gaddarn, who is, in fact, Otis. When Mish sees Aaron and Alexander together, and realises the family link, he takes Aaron and Toby to Otis, who rejects them. A way must be found to rescue them, but a great friend must die before the family can be reunited.

-I can tell you right now, I'm going to cry when I read this book.

The Buddha of Suburbia by Hanif Kureishi

The Buddha of Suburbia, Hanif Kureishi's first novel, is a tour de force of comic invention, a bizarre, often hilarious, and totally original picture of the life of a young Pakistani growing up in 1970s Britain. Karim lives with his Mum and Dad in a suburb of south London and dreams of making his escape to the bright lights of the big city. But his father is no ordinary Dad, he is 'the buddha of suburbia', a strange and compelling figure whose powers of meditation hold a circle of would-be mystics spellbound with the fascinations of the East. Among his disciples is the glamorous and ambitious Eva, and when 'the buddha of suburbia' runs off with her to a crumbling flat in Barons Court, Karim's life becomes changed in ways that even he had never dreamed of . . .

-This sounds like such a funny read, And unlike anything I've EVER read. Cool *g*

As teenagers, Poppy Carlisle and Serena Gorringe were the only witnesses to a tragic event. Amid heated public debate, the two seemingly glamorous teens were dubbed 'The Ice Cream Girls' by the press and were dealt with by the courts. Years later, having led very different lives, Poppy is keen to set the record straight about what really happened, while Serena wants no one in her present to find out about her past. But some secrets will not stay buried - and if theirs is revealed, everything will become a living hell all over again ...Gripping, thought-provoking and heart-warming, The Ice Cream Girls will make you wonder if you can ever truly know the people you love.

-I'm looking forward to reading 'British poc chick lit." Haha. It sounds like a lighter read but still has some substance.

Half World by Hiromi Goto

Melanie Tamaki is human—but her parents aren’t. They are from Half World, a Limbo between our world and the afterlife, and her father is still there. When her mother disappears, Melanie must follow her to Half World—and neither of them may return alive. Imagine Coraline as filmed by the Japanese animator Hayao Miyazaki (Howl’s Moving Castle), or Neil Gaiman collaborating with Charles de Lint. Half World is vivid, visceral, unforgettable, a combination of prose and images that will haunt you.
-I'm intrigued that not only is this book a dark fantasy with a poc, but it has NO ROMANCE. For a YA book that is incredibly rare. It focuses on a mother-daughter relationship. Yay! Thank you Ms. Goto :)
What books did you get this week? Anyone else feel swamped by books? What a lovely feeling...
Posted by MissA at 12/05/2010 08:25:00 PM